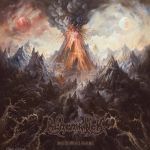 Everybody familiar with the Swedish Death Metal scene stumbled over the name RUNEMAGICK at least once, maybe even without ever listening to their material. Active since 1990 the band around Nicklas Rudolfsson (SACRAMENTUM) is one of the veterans of the scene although they were denied the great success. To be honest I have not listened to them for quite a while and also missed out their previous albums. Signed to High Roller Records now the band presents their 13th output “Into Desolate Realms”. The opener ‘Remnants Of The Old’ already paves the way for the remaining tracks. Well done Doom / Death played in a very ancient way. Their version is very slow but the balance between Death and Doom is very well chosen and Death Metal is always the dominant style. Reminding me of the good old stuff from UK from the 90s or the well-known bunch of good Dutch bands, RUNEMAGICK still follow this rotten path. The last band I enjoyed that much was EXTREME COLD WINTER. The title track ‘Into Desolate Realms’ is the next strike with its deep and intense grunts, the freezing thick guitars and the intense bass lines really spread a gloomy frightening atmosphere. Somehow the first two PARADISE LOST albums come into my mind but just by meaning the atmosphere. ‘The Opening Of Dead Gates’ spreads the same atmosphere as its lyrical content. The guitar work is really brilliant in this track and definitely worth to check. The next little highlight is ‘In The Sign Of The Dragon Star’ which is another doomed monster with a very British painting especially at the end the track could easily have fitted on an old album of MY DYING BRIDE or ANATHEMA. Another track worth to mention is ‘Wolves Of Nocturnal Light’ with its creeping guitars: lasting over twelve minutes this track is a real beast and damn it takes you directly on a gloomy graveyard to join your own funeral. With “Into Desolate Reals”, RUNEMAGICK have written an album against all kinds of trends hailing a style which unfortunately has ceased to exist some years ago. As this was the style which brought me into the Death Metal world, I really appreciate their approach to keep this style alive, but I am definitely also very critical with it and RUNEMAGICK have managed to produce a very good album without fillers and with lots of good things to explore. Worth to check for all Doom / Death fans and the right soundtrack for the rising autumn. For more info, check the following sources: www.facebook.com/runemagick, www.hrrecords.de

RUNEMAGICK - Requiem Of The Apocalypse - by Stefan Franke