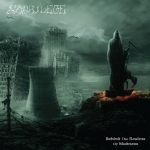 SACRILEGE
Behind The Realms Of Madness
(Relapse Records)
58:41min

What we have here is a very nice re-release of SACRILEGE’s classic Crust / Punk / Thrash hybrid entitled “Behind The Realms Of Madness”. Considered a classic among lovers of this style of music, I personally never really checked out SACRILEGE’s material which I now regret because this is a crushing record from front to back. The release itself features the six tracks included on the album as well as the “Demo I / 86” and two tracks recorded in 2015 (one new, one re-recorded) plus two live tracks. Now for the readers who are yet unfamiliar with what “Behind The Realms Of Madness” is about I can only advise you to check it out immediately. SACRILEGE deliver music that was quite ahead of its time when talking about aggression and intensity as well as sound-wise. While ‘Lifeline’ somehow reminds of earliest METALLICA on steroids (!!!) with killer Punk oriented female vocals, the second track ‘Shadow From Mordor’ already delivers some interesting riffs towards the end of the song that could have been a part of BOLT THROWER’s “In Battle There Is No Law”. The same goes for the middle part in third track ‘At Death’s Door’. It’s furthermore not only the riffs that remind of late 80s / early 90s British Death Metal but also the sound in general. The other half of the original record consists of more thrashing mayhem and mid-tempo neck breakers. After that it’s time for the three demo tracks which were released after the debut record and basically continue what the band created on “Behind The Realms…”. Very interesting to see that they later turned into a purely Thrash Metal oriented band with their second full length and even added bits and pieces of Doom Metal into their third album. The first new song entitled ‘Feed’ starts off with said Doom Metal influences but gets a bit faster later on. Besides its intro the song somehow reminds me of what SACRIFICE did on their latest album “The Ones I Condemn”. The other new one (actually this song has been on the band’s very first demo) ‘Dig Your Own Grave’ delivers pure power and energy throughout its 1:51min but unfortunately does not come close to the bands earlier material because of a too sterile sounding production. The live tracks on the other hand are 80s material again and deliver a far better atmosphere. ‘The Closing Irony’ which is also part of the debut record sounds very tight and aggressive live as well as the ‘Anglican Scrape Attic’ split release track ‘Bloodrun’. Altogether this is a nice re-release with some bonus tracks to round the rather short playing time on “Behind The Realms Of Madness” off. If you already own a copy you probably won’t need this one but if not try to get your hands on it since the first two pressings are rather expensive (but come with a better cover). Click here for more information: www.facebook.com/pages/sacrilege-official/503256849820198, www.relapse.com