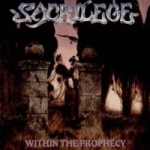 Throughout the past decade we have seen a great resurgence of the old good Metal spirit, with the inception of a wide range of great Metal acts, also remarkable is that a lot of old, forgotten and long time deleted recordings have been resurrected, mainly on die hard fan based labels, and this is the case with Great Britain Epic Metal Merchants SACRILEGE (please don’t be confused with the American SACRILEGE B.C. or the Swedish melodic Death Metallers with the same name). With a short life span (5 years and only 20 gigs played), they developed from Punk-Crust / early Thrash metal to the Epic Metal sound (OMEN is a great reference that comes to my mind now about Epic Metal) with some demos and three full lengths (well, their first one, “Behind The Realms Of Madness” is considered a mini album by the band) in their discography, their second long player “Within The Prophecy” being their best work before they disbanded in 1989. This album brings to me real cool vibes from mid 80s with a constant battle of riffs courtesy of guitarist Damian Thompson, whom displayed his best at this record. Drummer Andy Baker’s and bassist Tony May’s performances make a perfect mid paced march companion to Mr. Thompson’s riff aggression, everything crowned with the amazing voice of Miss Lynda “Tam” Simpson, a thin blonde lady with a voice beyond this world, a perfect blend of aggression and melodic assaults which fits naturally to the Epic Metal tag SACRILEGE highly performs on this amazing record. As I remarked previously, each song is a gem fulfilled of amazing epic riffs, mid paced speed (with great presence of the bass drumming and the low frequencies), perfectly flavoured with Tam’s voice, just check Metal anthems like ‘Flight Of The Nazgul’ or ‘Winds Of Vengeance’. I’m really glad that pieces of real Metal like this are being re-released to a new generation of Metal heads, and for you who are into these sounds over two decades and missed these kind of jewels it’s great time to get some great real Metal back in your collection. This official release has 6 extra bonus tracks (demo and live tracks), liner notes from Tony May, and tons of pics and flyers on a full-coloured booklet. Please also check the label’s other official re-releases, like ORIGINAL SIN, DEATHWISH, CARRIE, etc. at www.myspace.com/kelticrecords or just drop them a line at kelticrecords@gmail.com. By the way, Xtreem Music from Spain has released a great SACRILEGE demo compilation (for a review see elsewhere on this site). Band contact: www.sacrilege-uk.com