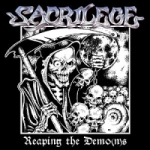 In the stream of re-releases Xtreem Music sent recently, there was this compilation of British SACRILEGE featuring their four demos and some rare and live stuff. Shattered over two CDs and in two and half hours, you get plenty to enjoy. What surprised me is that this is the second compilation which features their demos, after "Time To Face The Reaper" which is released by Absurd Records in the same year. Reason behind it that both labels had plans to release compilations – part from each other and in collaboration with different former members. No matter which one of these you choose… The demos featured here are some of the best from UK ever. Usually such demo-compilations start with the oldest stuff to chronologically show a band’s development, but on this one is chosen for a reversed order because the later work features the better-sounding recordings and better shows the style that the band was more famous for. Well, every order whatsover would work fine, because each one is great and intense. It also learns that the Crust-influence decreased over time. That SACRILEGE didn’t get the status they actually deserved is one of many mysteries of the music-industry. CD one features Demo 4 (Aug. ’86), Demo 3 (Jan. ’86), "Behind The Realms" recording session (Aug. ’85), Demo 2 (Feb. ’85) and Demo 1 (’84) with a total of 17 tracks. People who are unfamiliar with SACRILEGE, some structures in songwriting and cool riffing reminded me of something brutal like (old) BOLT THROWER and NAPALM DEATH (no, not in terms of speed, but because of a crusty / hardcorish edge!). It’s no secret that BOLT THROWER admit themselves that they’re very strongly influenced by SACRILEGE. Mixed with the venomous vocals of Linda Simpson makes this a hell of a Thrash storm. Each track seems to be ready to explode from aggression and power but is held under control in that way that every break builds in tension and intensity. Very effective. After the 2nd demo SACRILEGE released their debut "Behind The Realms Of Madness" in 1985 and later the thrashy "Within The Prophecy" (1987) and the doomy "Turn Back Trilobite" (1989) to called it the quits. Well, personally I prefer the demos because of the vocals. CD 2 features a 9-track liveshow from May 3th 1986 at Adam & Eve in Leeds. Especially Linda’s vocals are cooler than ever and show the band as a tight quartet. Second part features The Rehearsals, a 7-track live recording at Rich Bitch Studios in Sept. 1987. As you might know, some members later showed up in bands like BENEDICTION, CEREBAL FIX and NAPALM DEATH. This is the one and only way to learn a lesson in UK classic Thrash Metal which everybody should know! Essential. For more info and soundsamples, go to www.sacrilege-uk.com or to www.xtreemmusic.com.