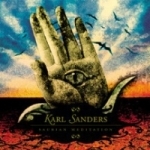 We can keep this rather short, cause if it wouldn’t be NILE’s creative force, Karl Sanders, who released this solo album we probably would have ignored it completely… Not because it is so controversial, irrelevant or bad, but simply because it has nothing to do with brutal music at all and therefore usually does not deserve a place in our magazine. So, what has Karl come up with then? Well, if you’re familiar with what made NILE so popular in the first place and then take away all Metal related elements, you are already heading in the right direction here. If you add to that the label’s marketing slogan "For fans of NILE, DEAD CAN DANCE, TRIAL OF THE BOW and LISA GERRARD…" you furthermore should be aware of something very atmospheric and emotional, which "Saurian Meditation" without a doubt is. The album’s title is another hint, cause all of the ten tracks are composed in a very relaxed, yet often very ritual or dramatic manner, with an overall very asiatic / middle eastern feel to them. It could easily be used as a soundtrack to an historical movie epos… Having all this in mind I must say that I was still very much impressed by Karl’s talent as the stuff really managed to keep my attention from start to finish. So, if you are a NILE die hard fan or open minded enough to listen to instrumantal soundtrack music every now and then, you should give this record a fair chance, because it turned out far more convincing than I expected it to become. By the way, "Saurian Meditation" also features contributions of former MORBID ANGEL frontman David Vincent, but of course not as a Death Metal vocalist, but more as a character who’s responsible for some heroic type of speech (kinda like the logical next step to what he used to deliver in ‘God Of Emptiness’).