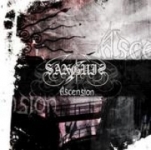 Not sure but I wasn’t expecting any further releases from SANGUIS due to the fact that their former album “Infernum Infinitum” was one of the real poor examples of simple and boring Black Metal Anno 2004. But time goes by and honestly speaking I’m really impressed by this Austrian horde and their release “Ascension”. The focus shifted from the raw, ugly and purest form of Black Metal to a still very aggressive but more “melodic” type, meaning the guitars are much more structured (there are even several solos on the album) and I think that the intention of SANGUIS can be compared with the metamorphosis of bands like DARK FORTRESS and to some degree IMMORTAL. Especially the opener ‘I Saw The Fall Of Idols’, without doubt the highlight and best song of “Ascension”, reminds me more than once of the “Heart Of Winter” album from our Norwegian friends. The album has been recorded in 2006 and I again start wondering why so many average releases / bands are signed and other bands need nearly 2 years to distribute their art to the Black Metal society, a really sick business. ‘Unsilent Storms In The North Abyss’ as bonus track is not a very unique choice but the song is well chosen and performed; so thanks to Bloodred Horizon for releasing this album which shows that the old Austrian Black Metal is still alive – with a smaller flame maybe than 10 years ago but a flame is a flame and this is all what counts! www.sanguis.at, www.bloodred-horizon-records.com