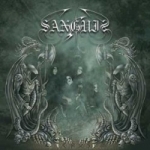 Furious! Only 3 years after SANGUIS was founded and with only one demo called “Mortal Art Of Blood” in their history, their full-length debut album “Chaosgate Guardians” is released via Supreme Chaos Records. And they deserve it as the band consists of excellent musicians and songwriters! These Austrians play Black Metal in its original spirit. There are neither cheap keyboards nor expensive orchestras on here – the band uses the guitars for cutting melodies. SANGUIS play their music at the speed of sound but they never forget to vary their tracks. As I already mentioned: they’re good songwriters. ‘Of Solitude And Cosmic Streams’ even turns out as a minor “hit” in terms of Black Metal. Finally, the good production shows that nobody needs a bad sound in order to bring something across. If you’re tired of bombastic Black Metal productions (no names here) but still want to hear what a band is actually playing (and believe me: the quality on here will grip you with force) – check out SANGUIS! www.8ung.at/sanguis