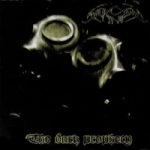 If I base this review on what Mr. Cthulhu E. wrote about SARCOMA INC’s debut full length “Torment Rides Forever”, I can only conclude that the band pretty much stayed true to themselves and basically continued on from what they had already delivered back then.The nine featured tracks on “The Dark Prophecy” once again come across very intense, aggressive and old school sounding, but to me are lacking a little bit in an exciting songwriting. The album kicks off with some very promising riffing, but unfortunately doesn’t live up to that and ends up sounding very monotonous shortly after. SARCOMA INC. decided to focus on speed for speed’s sake instead of memorable structuring, which is too bad as they certainly can do better than that. The overall production perfectly compliments their material though, for it is totally raw and ugly and by no means polished. SARCOMA INC.’s musical outbursts could easily be described as the bastard child of classic KREATOR and MERCILESS with some grim Black Metal insanity incorporated. Blackened Thrash so to speak… And as we all know, this music has to be experienced / performed in a live environment… So, hopefully Daemon (bass, guitars and vocals) and Arghamon (drums) will finally be able to complete their line-up, write a couple catchier tunes and then play out for some old school ragers. A record deal with an established company would certainly help them as well (as they once again had to finance everything on their own). For ordering details and further information on the band contact: Sarcomainc@yahoo.no