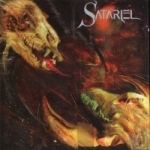 SATARIEL play some great sort of modern Thrash Metal. How’s that possible? Easy, they don’t use noisy sounds like MACHINE HEAD and the likes (okay, a tiny but acceptable little bit). Instead, the band reminds me a bit of Devin Townsend. Especially the strange but beautiful choruses like on, ‘Coffin Gateways’ make SATARIEL sound special. Fast thrashers like the aforementioned song are opposed to groove monsters like ‘Stranger World’ that grab you and force you to bang your poor head. This also keeps the album balanced and exciting. Here and there SATARIEL use the intensity of Black and Death Metal for their songs like on ‘The Claim’. Obviously they don’t care too much about stylistic borders as long as it improves a song. Finally, the exciting songwriting combined with a good production would already be reason enough for me to strongly recommend “Phobos And Deimos” to you if, yes, if there was not that one fact of one of the best Metal singers ever contributing vocals on two songs, namely Messiah Marcolin (CANDLEMASS, MEMENTO MORI)! I’ve been humming the chorus of ‘Holy Trinity’ for weeks now, always with Marcolin’s voice in my ears. The difference between SATARIEL and Messiah’s other works adds yet another interesting aspect to this CD but the biggest surprise is that the song after those two tracks keeps me listening to the rest of the album as well and not only Messiah’s songs which counts for the quality of SATARIEL’s material and the decision to place a fast song at that point. Hey, it even took me a whole day of listening to SATARIEL before I couldn’t control myself any more and take out my CANDLEMASS CDs to listen to them over and over again for days! And guess which CD I fed my player with afterwards? Right, SATARIEL! So everybody should spend their time waiting for CANDLEMASS at Bang Your Head!!! and Wacken by listening to SATARIEL! Hugh!