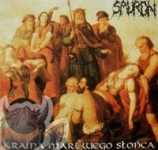 This is the first release for the Polish label Devil Worship Rec. and beside the "Kraina Martwego Slonca" album it includes the "The Baltic Fog" demo from 1995 from Polish band SAURON (I really wonder how many SAURONs are around actually – this must be at least the third). This band here offers us old-school mid- to uptempo Death / Black Metal that could have easily been released in the beginning of the 90s. No keyboards, no female vocals – and I really think that this is only for people that have experienced that time somehow as the others might get easily bored as these guys neither have supreme technical skills (nevertheless this is well-played but you are not to expect over-complicated songstructures and other nonsense) nor an Abyss-sound. This grows far more by feeling and its attitude. Surprisingly the demo-recordings – especially the tracks ‘Hellish Requiem’ and ‘In The Shadows Of Sventevith’ – although they are worse in sound are even better than the album in my opinion. Minor influences can be drawn from old German thrash-acts and BATHORY for example but with a typical Polish style somehow – at least no Norwegian influences here. To be tested by people who think that are bored by the latest outputs with too much of everything in it. I doubt that the price will be above 8,- US$ in Europe. www.analgrinder.prv.pl/sauron, Devil Worship Rec., Ul. Ostrowiecka 6/49, 26-600 Radom 12, Poland