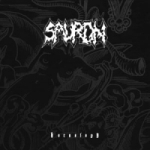 In these times of ever changing technology, I get kind of lost with all the new nomenclature, especially in concerning with shit like "digibooks". Fuck is that to me, I wonder? This release was initially a demo that was released in 2006 as promo CDR and then re-released a year or so later by the company Old Temple, as a quote unquote digibook. I don’t know… Mayhaps this is something only that can be played on a fucking palm pilot in the dead of night, under a funeral moon, blah blah blah or like some kind of advanced MP3 player, like what I hear on Television as what is referred to as a BlackBerry?? Enough nerd wizardry… What ever a digibook is, this demo was made to fit that and made to be played with what ever plays those things. I however was fortunate enough to have a promo sent to me as a standard CD, and so here we go! On with the review… SAURON first off is not the most original of band names no, and certainly not even within the band’s own country of Poland. Whereas this SAURON is the third in line of having the same band moniker?! Confusing? You bet! Just like what the fuck a digibook is… Anyhow – I listen to this CD re-release and I think… it’s okay. Not really something to behold or in some fevored need to be re-released. As a demo and from only two years ago… What is the haste in getting this out again? Sure they are fast, and sure they are moderately proficient for such youngsters of Polish descent playing speedy Black Metal. But is that all? This isn’t 1998 or 1996 or even 1993 for Christ sake. Besides all this ground has been covered and then some, since those times. Not the least of that there being the fact that Poland already has more than a few speedy Black Metal acts already and signed! Anyone heard of THUNDERBOLT? So I am back to square one with this demo… What is the fucking point with this CD of SAURON? Why the haste and why the need of a re-release? Why the need to push more rehash shit upon us to review, even if this CD is accompanied by slightly better than average guitar work? Essentially putting these wolves among sheep, on top of your standard bunch of pandas in an already clotted sea of oily blackened sludge? Contact: www.oldtemple.com or www.myspace.com/hornology