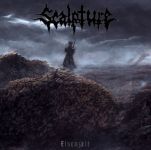 German warriors SCALPTURE will soon return with their second full-length “Eisenzeit” via F.D.A. Records. The title of the first track pretty much nails it. ‘The Storm’ is a real little storm unleashed in the filthy area of North-Rhine Westphalia. Good old school Death Metal with a pretty good doze of GRAVE and BOLT THROWER enriched by a damn thick production. After two minutes the storm is already over but gets continued with ‘Ebbs Into Stalemate’, a mid-tenpo neckbreaker with a damn cool groove. What I really love here is the ever audible bass-guitar and and their melodic leads. The material is really matured and even without knowing their first album, this one is a real beast and shows that Germany is a leading force in the European Death Metal underground. Sure dropping names would make this review easier but I just can‘t find the right names as several influences come into my mind but the guys really understand to make their own thing out of their influences which clearly are both, European and American origined. Even though it seems pretty popular nowadays to incorporate World War topics in Death Metal, their ‘Und Ehre Ist’s’ has some CANNIBAL CORPSE vibes before returning to Dutch influences. The blastbeats are damn cool and the German lyrics sound like Corpsegrinder is singing his first German track. But the middle part is a lot more unique then the stuff known from CANNIBAL CORPSE. My favourite track on the album is the well done ‘Fire Flies Through Empty Skies’ which covers all, I expect from Death Metal. Groovy rhythm guitars, with memorable melodies and yes, the guys from Bielefeld really know how to write good tracks. This one is a damn killer and the melody really crawls into the brain and spreads a menacing atmosphere before ‘Hinterlandsymphonie’ goes back to war and crushes some skulls again. I like both of their faces but really appreciate their more melodic and even progressive approaches. ‘Eisenzeit’ and the last one ‘All Quiet On The Western Front’ are dealing with the same war topics and are also pretty enjoyable with their German lyrics again. SCALPTURE have written a very good and matured album with “Eisenzeit” and combined with the power of the right label their time will come. Definitely worth to check and the first little highlight for the coming year. In the meantime check them out via one of the following sources: www.facebook.com/scalpture, www.fda-records.com