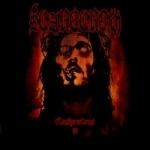 Here we have crazy Finnish bastards going by the name SCARECROW with their 3rd full-length album ‘Flesheaters". Yummy! Right from the get go they unleash high octane, fast and uncompromising Horror Punk! Catchy as a fuckin’ STD, rough and sleazy in all the right places, SCARECROW pummel though 12 tracks with such delicious names as ‘Night Of The Butterfly Knives’, ‘Mutilated Sweet Heart’, ‘Flesheater Superstars’, ‘Hands Of Satanic Porn’ and so on, united in unbridled Punk spirit and a dash of sing-along choruses. I’ve checked few of their older tracks which were more punky and fast, in fact, some of them are abnormally fast, whereas "Flesheaters" utilize fatter and heavier production, in a ways similar to mid-90s ENTOMBED stuff. Musicallly taking their cues from MISFITS and their whole breed, these Finnish sleazebags originally formed in 2000 and have released a slew of EPs before recording the first album "Deadcrow" in 2006 and the following "The Terror" in 2009, so they’ve been at this dirty game for quite a while. "Flesheaters" is by far the most accomplished and heaviest sounding release of them all. Obnoxious and in-your-face, that’s how Punk has to be and with an added metallic punch and Horror themes, this is as good as it gets! Check them out at: www.scarecrow.rocks.it