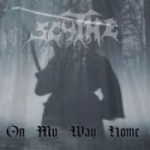 SCYTHE is a two-piece (!!) band from the northern part of Germany that has been around since 1994 by now and already released two CD’s prior to “On My Way Home” (“Last Eclipse” in 1999 and “Silent Is The Future” in 2000). Judging them by this eleven new tracks it’s quite obvious that they are working really hard to create something unique and of superior quality in order not to get lost among the masses of brutal bands that are still flooding the market like hell. The fact that they name Swedish OPETH as an influence should already gain them some attention among those of you who like their Death Metal played a little bit more sophisticated. The nucleus of their material is very brutal, yet extremely tight performed Death Metal. But just like OPETH, also SCYTHE incorporate a lot of mellow, acoustic and almost psychadelic interludes in their mainly pretty long compositions. Certainly not an easy listening band for heavy drinking sessions, but not too complicated in their songwriting structures either. SCYTHE deliver a nicely balanced mixture of atmosphere and brutality, and all that even without (!) copying their Swedish heroes. Interesting band on the lookout for some label to pick them up. The CD sells for 10€ (ppd.) at this address: Norman Müller, Steinbachtal 21, 21244 Buchholz, Germany, www.scythe-metal.de