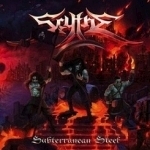 Rick Scythe, the mastermind behind already long disbanded Chicago underground Metal troops USURPER, decided not to rest on his laurels for too long. Rick formed SCYTHE in 2009, wanting to rip some flesh even more through this new Metal incarnation with the best of his songwriting abilities. "Beware The Scythe", the band’s debut album that was released in 2012, was destined to become an instant underground classic Metal record, in which SCYTHE delivered their shit very uncompromisingly, combining some of the best elements that some specific sub-genres of Heavy Metal could possibly offer, with a slice of true Rock’n’Roll attitude that always makes things a bit more special. Rick’s songwriting muscle on SCYTHE’s follow-up album, "Subterranean Steel", has become even a bit sharper and stronger than it was on the band’s throughout excellent debut. Not only he has probably put tons of sweat and hours of work into the songs of this new opus with his two fellow warriors Joey (on drums) and Dan (on bass), to make "Subterranean Steel" sound like one helluva entertaining record, but in a way the guys have obviously even had a bigger schema in their minds when penning the songs down for this record: to make more distance to everything what Rick’s previous band USURPER was all about musically in the past. Indeed, SCYTHE does sound quite different compared to USURPER’s way more technical and more metallic approach even if it still would be easy to put a finger over this or that song on "Subterranean Steel" – and say, ‘am I going through some déjà vus as momentarily I can hear some very USURPER-ish influences here and there…’. Well, of course nobody can escape from his / her past completely – and in fact, there’s even no need to that either. What, however, makes SCYTHE different from USURPER music wise at least, is the band’s wider and more unprejudiced attitude to see through the whole Metal and Rock spectrum, absorbing all kinds of tasty and sweet elements from here and there, into their own rebellious Metal anthems. It gotta be said that SCYTHE sounds amazingly relaxed yet still at the same time, very focused and determined to kill some posers on "Subterranean Steel", full of vibrant energy and barbaric instincts – much like VENOM or CELTIC FROST in their past prime. There’s simply nothing fake in them at all. SCYTHE’s pure rawness and already classy filthiness presented in the songs on "Subterranean Steel", to hit deep into the heart of neck-snapping underground Metal, is overall inerrant. I for one, am honestly infatuated with SCYTHE’s whole presence on "Subterranean Steel". If you missed my point, well, let me say that this is a very goddammit infectious release from SCYTHE, securely yet even so effortlessly, ending up on my top 2013 albums list for sure. For finding more about these filthy hounds of hell, go to burn in hell with them at: www.scythe.us, label: www.primitivereaction.com