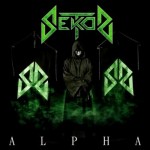 When I saw this album, the logo and the band photo, I guessed it would be another retro Thrash act… but not quite so. High speed Death / Thrash Metal with technical inclinations is what this Bavarian quartet has to offer. Clearly the band worked hard on creating complex songs with good riffs and solos. There’s a lot going on, and if you’re into this kind of stuff you’ll appreciate the speed and the skill. In some places (like in ‘A Fire Burns’) you can even hear some Black touches. The vocals are on the thrashy side, and they are competent. To my liking, though, they are the weaker link in the chain. Not only do they not quite manage to live up to the level of the instruments, but sometimes they also shift to a rather more modern approach, losing a bit of the old school touch I most appreciate. Say for instance ‘The Rage’, a track that begins with a totally killer SLAYER vibe. A bit further into the song you begin to have these vocalizations that brings stuff like THE HAUNTED to my mind… It is commendable that the vocalist attempts to deliver a diversified singing, but it doesn’t always sound top notch. Some songs are really good, such as ‘The Question’ and ‘Social Predator’, but the instrumental quality is always high throughout the album, even rather impressive both in composition (with the tempo and riff changes) and in technical virtue (with the flashy solos and the fast, intricate drumming). The production is also quite good, helping to display their prowess, as every instrument can be heard distinctively without losing its aggression. A solid debut album, holding promising perspectives… but with work to be done, mainly in the vocal department, as far as I’m concerned. www.facebook.com/sektor.band, www.rebirththemetal.de.vu