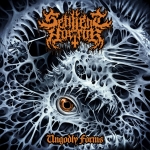 SENTIENT HORROR is a band from New Jersey, USA, which released a couple of demos / EPs in the last couple of years under the name SENTIENCE. They were formed by guitarist / vocalist Matt Moliti after putting Power / Thrash act DARK EMPIRE on ice. Having now updated their moniker, this is their debut album and it sounds extremely much like the old school Swedish Death Metal of DISMEMBER and ENTOMBED. This is something the band cultivates and actively pursues – they explicitly wish to be as Swedish Death Metal as possible, taking pride in the acquiescent words of EDGE OF SANITY’s Dan Swanö, who also did the mastering of the album at Unisound Studios (as he had done for SENTIENCE’s previous material). EDGE OF SANITY may also be counted among the band’s influences, namely in some of the more "progressive" material that is more apparent in the complex and beautifully performed soloing, although SENTIENT HORROR remain more steadfast within the borders of true Death Metal, not really venturing into uncharted lands as EDGE OF SANITY sometimes did. Sometimes I was listening to passages like the beginning of ‘Blood Rot’ and realising how very much DISMEMBER it sounds… it is perhaps the main name to forward when talking about this release, even though you’re in pretty safe ground to think of early 90s Death Metal in general. Even the cover artwork seems to be much inspired by CARNAGE’s album. As for those "progressive" inclinations, they are not one of those extremely technical and fast Death Metal bands you now get and that I don’t really care much about to be honest, in which often dramatic tempo changes and weird signatures take precedence over music. This is a true kick ass Death Metal band with great technical solos, and those are a bonus in music such as this. You can even check online a guitar play-through video for ‘Abyssal Ways’, the opening track (check the Voices From the Darkside news section). If you are into this kind of music, SENTIENT HORROR are certainly recommended, as they do a great job in what they set out to do. Go seek your deathly fix at the following sites: www.facebook.com/sentienthorrorofficial, https://sentienthorrorofficial.bandcamp.com, label info at: www.facebook.com/testimonyrecords