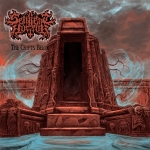 American newcomers SENTIENT HORROR have been creating a bit of a buzz in the scene recently and that is not just because of the buzzsaw Swedish style guitar sound that they utilise but because they unleash some seriously savage and very impressively played old school Death Metal. They pour all of the best ingredients of early – mid 90s Death Metal into a musical melting pot and the end result is full of very tasty hooks, riffs and leads which bring to mind the likes of old Swedish masters such as DISMEMBER, EDGE OF SANITY etc. They have keen ear for memorable melodies and vocal lines which will embed themselves into your memory after only one or two listens, the chorus in ‘Bled Dry By The Night’ being a very good example of their ability to write caustic but incredibly catchy Death Metal. The vocals are deeply growled and have a lot of depth to them but are also clearly enunciated and you can hear a lot of the lyrics clearly. The musicianship in every aspect on this 5 song EP is excellently executed with furious finesse and they inject some darkly atmospheric passages especially on the cover of the EDGE OF SANITY classic ‘Darkday’ where keyboards are used, which is a fine tribute to an obviously big influence. The production, overall sound and mix is very powerful and potent with each instrument cutting sharply through, but that is no surprise since both Damian Herring and Dan Swanö himself were both involved and contributed their mixing and mastering talents to this release respectively. SENTIENT HORROR perfectly evoke the glory days of the genre whilst putting their own black mark on things. Malevolent and majestic in equal measure. All further information at: www.facebook.com/sentienthorrorofficial, label contact: www.facebook.com/testimonyrecords