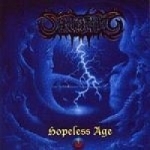 This Austrian five piece has been around since July 1997 and recorded and released a demo CD entitled "Revenge On Mankind" shortly after which sold approximately 200 copies until now. "Hopeless Age" is their first full length album, which they also financed on their own in early 2000 and that’s already all I can really tell you about SEPTICEMIA, apart from the fact that they still play a very immature sounding mixture of Death and Thrash Metal, with a few additional, kinda Black Metal-ish sounding vocals here and there. Bands like this you will get to see on a regular base around the corner in your local youth club. They are all still lacking in identity, arrangement qualities and a real musical vision. There’s some really good ideas in the eleven songs (plus intro), but certainly not enough at this point to be released on a CD already and I certainly won’t play the disc again after this review is finished! All in all it just tends to bore me way too quickly. I mean, the market is definitely flooded enough with tons of average bands nowadays that even get their stuff out through a label (big or small), so I seriously doubt that you’re really interested in spending your money on a product which is hardly reaching those standards, unless you’re maybe more concerned about the visual side of a release, which in SEPTICEMIA’s case looks really good. But hey, who am I to complain?! Maybe "Hopeless Age" is just for promotional manner or to get gigs a little easier and not even meant for sale, so you better get all further information from the following address: Peter Knall, Brentenmaisstr. 56, A – 3012 Wolfsgraben, Austria, email: septicemia@gmx.at, www.septicemia.start.at