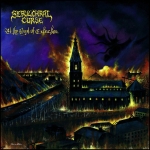 With the Finnish SEPULCHRAL CURSE we have the first personal tip of the new year. The five piece from Turku delivers their second EP after 2014’s “A Birth In Death” that already featured fine D-Beat infiltrated Death Metal with hints on country mates like DEMILICH, FUNEBRE or DEMIGOD. That first EP was a nice start, but with their new output “At The Onset Of Extinction”, they moved a big step forward. And it’s not only the progress in songwriting and the improved and better fitting production. It’s the fact that SEPULCHRAL CURSE took a slight correction in their musical direction. On the first EP, the band already had a decent influence of Black Metal, but now, these moments are a lot more present and became a trademark of SEPULCHRAL CURSE, both in music and vocals. Thus the sound of the band got more unique than before. The opening ‘Envisioned In Scars’ already underlines the new musical direction of SEPULCHRAL CURSE and impresses with aggressive blackened yelling. With this one, the following ‘In Purifying Essence’ with its remarkable Black melodies and the Death Metal ballbreaker ‘Gospel Of Bones’ the band already has a bunch of aces up their sleeve. But the final Black / Death epic ‘Disrupting Lights Of Extinction’ takes the biscuit, since this Doom infiltrated, nearly progressive song is a perfect example how to create unique Death Metal. The nearly ten minutes are always very thrilling and crown an EP that make SEPULCHRAL CURSE one of the most hopeful bands to release a grand first full length album. I can hardly wait. Until that day, get this EP! Asides from the CD on Transcending Obscurity, there also is a limited and very fine tape version of “At The Onset Of Extinction” released by the new and dedicated German tape label Lycanthropic Chants. Steffen already released the great and also limited tape EPs by GOD DISEASE and MORTE, so with this EP, he does a hat trick. To verify my words, visit the band: www.facebook.com/sepulchralcursedm or http://sepulchralcurse.bandcamp.com. And if you want to check out and support enthusiasts of the underground, either visit: www.lycanthropic.de or www.transcendingobscurity.com