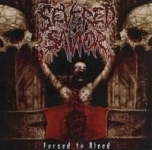 I’ll be damned if SEVERED SAVIOR aren’t going to become one of the new “hopefuls” in the brutal Death genre. They skilfully mix musical influences of DEICIDE, SUFFOCATION and PESSIMIST and come up with their own powerful, aggressive brutal cocktail of death. The eight songs on this EP include a 2001 and a 2000 recording session and prove best, why SEVERED SAVIOR were signed to Unique Leader just recently – can’t wait to hear their debut CD “Brutality Is Law”! Killing riffs, punishing drums and vocals that positively differ from most brutal Death Metal bands today, which often tend to sound like farting and not growling, make “Forced To Bleed” a valuable release and the Jon Zig cover is also quite nice. The vocalist Dusty Boisjolie can really be compared to good old Glen Benton, but does not scream as often as the DEICIDE-boss. My personal favourite song on “Forced To Bleed” is the title track, but fuck – there aren’t any weak songs on this MCD – just eight, cool brutal Death tunes, that tell you one thing: Watch out for SEVERED SAVIOR, they are good, they are brutal, they are going to kill you!!! The label’s website: www.disfiguredrecords.com For information about the band, surf to: www.severedsavior.com Email: flailinghumans@hotmail.com