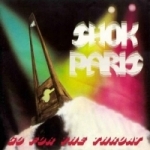 Anybody into classic Heavy Metal (“me, me!”)? Well, in that case, this re-release of one of the most popular bands of the 80s Cleveland scene is something for you. Being the first Auburn Records release, this record became a rarity pretty quick. It was never a big problem to get a hold of SHOK’s “Steel And Starlight” album – at least on vinyl – but I only had this crappy Reborn Classics bootleg. Now “Go For The Throat” is available for everybody with a good taste – in a decent sound quality. It’s “typical” 80s Metal (whatever that is): highly memorable songs such as ‘Battle Cry’, ‘Burn It Down’, the title track and pretty much all the other songs as well. Above all, there is the voice of one of the best Metal singers ever: Vic Hix. Rough with a great range. Just like the equally essential BREAKER re-release, this one comes with a packed booklet (lyrics and a pretty long interview by Mark Gromen) plus 9 bonus tracks, mostly live recordings. But there are 2 rare studio tracks as well: their contribution to the “Cleveland Metal” compilation, ‘Go Down Fighting’, featuring their original lead singer Buddy McCormack as well as the track for New Renaissance Records’ “Metal Madness” sampler, ‘Streets Of Pleasure’, which were both re-recorded for their second longplayer. If you like 80s Metal, there is no way around this release. And the future’s looking bright: somewhere I read that Bill Peters is planning to re-release all Auburn records, not only BREAKER and SHOK! As they always released high quality, you’ll have to check out the homepage to stay informed: www.auburnrecords.com – of course, you can order this CD directly there or go for mailorders like Hellion Records and the likes. Also, check out the BREAKER re-releases or Vic Hix’ new band AFTERSHOCK!