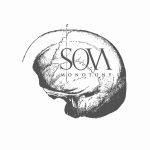 SHRINE OV ABSURD is a one-man band from Cuba and the musical child of Conspirator. After 2018’s debut “The Undeniable Possibility Of Loss”, this is their second release, and second album, released in physical format by Godz Ov War Productions. It consists of five songs, named with roman numerals (I to V). The sound is more refreshing than it might be anticipated, since it manages to blend in a surprising way a melodic approach with a raw, grim sound. In fact, the Norwegian influence is absolutely evident, and the effective vocals often remind me of Abbath’s. The lyrics are well written and deal with religion and the human condition from an artistic and philosophical standpoint, almost abstract sometimes. The songs are not minimalistic, but rather thought out and varied, often mid-tempo but exploring different paths, with a solid instrumental backing of the vocal delivery. The result may not be particularly original or groundbreaking, but it’s definitely a good, robust album, juxtaposing atmospheric, elaborate parts and raw aggression in an impressive way, mainly considering the somewhat unusual Cuban background. All five songs are competent and imposing, with my personal favourite being the closing ‘V’, combining contrasting riffs and fine drumming. A strong, dense album to be heard repeatedly and absorbed. Hear their sound at www.facebook.com/shrineovabsurd, www.facebook.com/godzovwar