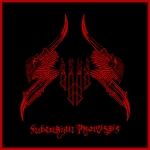 I probably haven’t listened to any other album as much lately, as to “Sumerian Promises”, the debut full length from Basque / German three piece SIJJIN. Compared to the majority of releases that are flooding the market these days, SIJJIN definitely sounds like a breath of fresh air, even though the band is deeply rooted in the Death / Thrash Metal of the late 80s / early 90s. So, if you expect just another ultra brutal Death Metal album or some blackened Doom / Death (because SIJJIN features former NECROS CHRISTOS members Malte Gericke on bass and vocals and Iván Hernández on drums), you better read on. This band is about raging old school thrashy Death Metal with a focus on great songwriting instead of blastbeats and guttural grunts. So, let’s see what we got here a bit more detailed. “Sumerian Promises” kicks off with ‘Daemon Blessex’, a fast (mostly very straight ahead) track, which immediately reminds me of old POSSESSED (already the vocal fade in at the very beginning reminds of ‘Confessions’), while the riff after the break at the 1:50 min mark even recalls the opening of METALLICA’s ‘Creeping Death’. Next up is ‘Dagger Of A Thousand Deaths’, another very fast song, that again recalls POSSESSED, while the breaks and slower moments have a very MORBID ANGEL like feel to them. ‘Those Who Wait To Enter’ starts very much like ‘Immortal Rites’, but quickly switches into ‘Blessed Are The Sick’ riffing, just a bit more thrashy and in general a bit more complex with some insane Trey Azagthoth like soloing. The title track ‘Sumerian Promises’ is another very fast, straight ahead track, in which the rhythm section has an early DEATH, “Leprosy” era feel to it. You’ll also hear a couple of MORBID ANGEL overtones here and there again, while at approximately 1:30 min you’ll get another Mike Torrao, early POSSESSED type guitar part. ‘Angel Of The Eastern Gate’, the only re-recorded track from the band’s one and only demo of the same name, is probably the most complex track on the album, with an unusual opening and several breaks, but also with the most catchy chorus of the entire record. ‘Passage: Hunting The Lizard’ is a 1:30 min short acoustic interlude that paves the way for ‘Unchain The Ghost’ and ‘Darkness On Saqqara’, two rather fast tracks, with a couple more POSSESSED / MORBID ANGEL overtones again, while the chorus of ‘Unchain The Ghost’ also reminds me of MORBID ANGEL’s ‘Blasphemy’ quite a bit (“Blaspheme The Ghost”…). The guitar melody right after the chorus of ‘White Mantras Bleed From Black Magic’ recalls POSSESSED’s ‘The Exorcist’ and then switches into “Blessed Are The Sick” era MORBID ANGEL. Together with ‘Angel Of The Eastern Gate’, ‘Outer Chambers Of Entity’ is the only track on the album that surpasses the 5 minutes mark and it is also the most diverse. From slower, to mid tempo parts, a great solo section and a rather thrashy main riff, it combines all strengths of the band. The album closer, ‘Condemned By Primal Contact’, has some more ‘Immortal Rites’ similarities in the opening and around 3:20 min, but is then followed by a gallopping thrashy riff. What I really appreciate about SIJJIN’s material is the fact that they don’t mix in any Black Metal influences, nor weird disharmonies and they also don’t follow the current trend to write extremely lengthy songs that surpass the ten or fifteen minutes boundaries. Malte’s voice is deep and brutal, but unlike most other Death Metal vocalists you can clearly understand what he’s singing. So, stylistically he often sounds more like a grim Tom Angelripper than a Craig Pillard, which perfectly fits the band’s material, as even the guitar isn’t as downtuned as we’re used to when it comes to Death Metal albums. The production is crystal clear and luckily lacks the annoying digital feel that so many albums suffer from these days (probably because the material was recorded live in the studio for the most parts). Overall it’s very powerful and you can perfectly hear every instrument in the mix. So, all in all this is a perfect album that is highly recommened to fans of the early days of extreme Metal on one hand, but also to Death Metal fans in general on the other. For more SIJJIN info please visit www.facebook.com/sijjin-102605617799602, to purchase “Sumerian Promises” check out www.sepulchralvoice.de for ordering details.