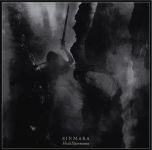 Iceland has produced a small but very eclectic Black Metal scene in recent years and one of the bands from that scene making a name for themselves on the wider international stage is the mystical SINMARA. This is their second full length album which is steeped in mysticism, chaos and norse mythology. They embrace their native language in some of the titles whilst also utilising english in others to create an interesting musical hybrid. Musically SINMARA blend the malevolent with the majestic, mixing raw coldness with icy atmospheric soundscapes with seemingly impressive ease. The production is powerful with each instrument cutting through the mix perfectly accentuating the aural atmosphere which is on offer here throughout. Dissonant vast dark soundscapes slowly unravel themselves throughout the album’s duration with moody melodies swirling around double kick propelled percussion filling the room with a cold ambience. There’s a certain cavernous sound to this album too with the vocals echoing through a layer of reverb which coldly compliments the crisp intricate guitar work. The tempos fluctuate with faster sections giving way to more slower brooding passages before the songs burst back into a barrage of uptempo double kick fuelled darkness. The gloominess of earlier KATATONIA comes to mind at times when some of the slower melancholic melodies are fully unfurled. If you like your Black Metal with a heavy dose of bombastic atmosphere, mood and melody but with a sharp icy bite then you should check out SINMARA’s sonic and sublime savagery. www.facebook.com/sinmaraofficial, www.van-records.de