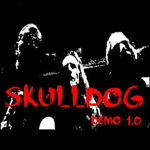 If I wish to listen to the best Thrash / Death Metal from France, my thoughts go immediately to the late ’80s / early ’90s albums of MASSACRA, AGRESSOR, MERCYLESS or LOUDBLAST. If SKULLDOG from Argenteuil, not far from Paris, would have skillfully followed that school, I would be really excited to write this review; unfortunately I don’t. The drum programming is really bad; along with the strongly digital sound of guitar and bass, it makes the whole production of a really poor quality. That reminds me a lot of a kind of old videogame music with some Industrial Metal influence. This could be a personal choice but it actually doesn’t, they’re looking for a drummer at the moment and I think they recorded and mixed everything by themselves without a professional gear. There are some decent ideas in the only two songs of this demo, but it happens very rarely. The vocals are a bit ridiculous, they’re not properly Thrash nor Death Metal; the singer Dead (what an original name!!) has some similarities to the very unique style of Nefarious from MACABRE in the use of some high pitched, but unfortunately he often sounds hoarse too.The graphic aspect doesn’t make my opinion any better about this band. I hope that these French guys will work hard to make something better soon. For more SKULLDOG information check out: www.skulldogmetal.com, www.facebook.com/skulldog.metalband, www.skulldog.bandcamp.com