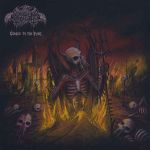 Belgium’s delivered shitloads of Metal children throughout the decades that have kicked all of our asses. Too many to name, so I won’t. And SLAUGHTER MESSIAH is no exception. Since their first demo in 2011, “Cursed To The Pyre” is their first actual full-length. Years of shorter releases have certainly prepared them for their debut album. A nice intro at the beginning of ‘From The Tomb Into The Void’ steadily evolves into a pulsing, Thrash / Death blur of swarming guitars, furious drums and goblin-induced vocals. ‘Mutilated By Depths’ begins at a mid-tempo pace before all hell breaks loose. The band’s confident in their playing and it shows. The musicianship and vocals are solid as is the production. ‘Pouring Chaos’ is just that, a swirling-guitared frenzy of riffs, solos, squelching, screaming vocals and drums that kick, pound and destroy. ‘Hideous Affliction’ is terror personified as ‘Descending To Black Fire’ is a spiraling staircase leading to certain fucking doom. The sound of fire opens the sixth track ‘Pyre’, obviously, I guess. Just when the band fools you once again into thinking their next track will slow down based on the first 30 seconds or so, they rip your beating heart out with rocket-fueled fury. This isn’t an album to relax to, my friend. Objects are bound to be shattered when SLAUGHTER MESSIAH is blasting through your speakers. ‘The Hammer Of Ghouls’ is simply monstrous and slithering as the final track ‘Fog Of The Malevolent Sore’ (whatever the fuck that means, but great title nonetheless) beats down your door and throttles you to within an inch of your life. “Cursed To The Pyre” is consistently brutal from beginning to end with no filler. Here’s hoping it doesn’t take another nine years for the next full-length. For more info, check out www.facebook.com/slaughtermessiah, www.hrrecords.de