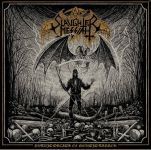 What a killer idea from High Roller Records to release this fine retrospective, compiling all pre-album SLAUGHTER MESSIAH material in one place. For those in the dark, this horde hailing from Belgium has been defiling underground Metal stages for 14 years now, releasing a demo “Deathlike Invasion” in 2012 and then following with the 3 song “Black Speed Terror” 7″ EP in 2013, the 3 song “Putrid Invokation” 12″ EP in 2014, the 4 song “Morbid Re-Incvantations” mini CD in 2016 and finally culminating with a debut full length album “Cursed To The Pyre” in 2020. So they’ve been taking a slow approach, honing and perfecting their diabolical music over the years, aiming for a quality over quantity. I respect that and it also shows when you blast it out through your speakers. SLAUGHTER MESSIAH immediately stands out from hundreds of other bands mostly blatantly copying their idols from the 80s. Yeah, their blackened thrashing Death Metal assault is build on the foundation of forefathers like BATHORY, SODOM, DESTRUCTION and POSSESSED, but they take it further and mold their own uniquely hellish compositions. Their sound in fact reminds me more of Chicago bands like USURPER and SCEPTER back from the 90s, delivering fleshy, pounding rhythms accompanied with violent, thrashing and memorable riffs while Lord Sabbathan (ex – ENTHRONED) comands over this scorching infernal orchestra with his characteristic harsh vocals. The compositions are never monotonous and after only a few listens each track becomes deeply ingrained in your psyche and that is a rare feat theses days. Besides the aforementioned EPs and mini CD, this retrospecive also includes the unreleased demo “The Lament Configuaraiton” from 2012, where the band sounds much thrashier, basicaly like a bastard child of early BATHORY and DESTRUCTION. So listening to this you can hear how SLAUGHTER MESSIAH has developed over 10 years and what a solid force it has become. Very highly recommended release for old school Black / Thrash / Death maniacs!! Bando info: www.facebook.com/slaughtermessiah, label: www.facebook.com/hrrecords