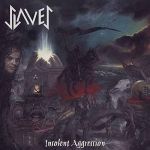 Formed in Italy in 2000, just from the look of the logo, the name of the songs and the very first few riffs, you cannot but to look at this as a total SLAYER copy. And I could end the review like that and nothing would change. But… wait a minute, I’m not done yet! SLAVES is inspired basically by the first two SLAYER albums, whereas the fast songs are just part of it, but that early SLAYER groove, where they sounded more like an evil Heavy Metal band rather than the diabolical Thrash Metal band, is always present. It is as if SLAVES have the same influences and background thus sounding like their heroes on purpose, but also doing it by coincidence. Confused? You should be! And that’s why this rare and obscure gem, which up until today was only available as a DIY CD-R, is finally getting a proper release. The appropriate way to call this band would be evil Speed Metal, with references to classic Heavy Metal, as well as to some early Hardcore / Punk bands which essentially gave birth to the more extreme Thrash Metal. Now, this was also released over 20 years ago and at that time very few gave a damn thing about the Thrash Metal revival a few years later, so it was a thing of luck that these guys were not bigger than the few ones following them (most likely with their last name as INSANE). And it is all about the riffs, those simple yet effective riffs that 80s Speed Metal was full of, with all its glory and defects, where some sloppy playing and amateurish, yet still good production, is part of the charm. It is all here. Adding some extra bonus tracks form their demo is also a welcome addition. If you are still stuck in the 80s and found nowadays “revival” Thrash boring, and feel like the old bands sound tired, lose your head to this Thrasher. www.facebook.com/insane.original, https://insanewap.bandcamp.com, www.facebook.com/hrrecords