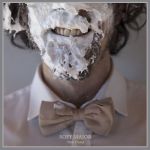 SOFY MAJOR is a three piece from France which started off as a Post Emo Hardcore project now describing them self as a “Big-Muff, Noise Rock and Hardcore influenced band”. For me it’s a very classical French Screamo post Punk thing with a dose of Sludge and disharmonious and progressive elements. I got to say it’s nothing I listen to at all. But some of these bands have those moments in which you think: do I like it or not? I tend to not like it most of the time, simply because there’s some nice riffing and melodies or good atmosphere in-between a lot of not so nice stuff. And that doesn’t make it amenable to me. Anyway, with “Total Dump” SOFY MAJOR release their 4th full length and it’s clearly a development to the older stuff, which I personally like better. Back then it was less chumming-up, it had more despair and honesty to it. Now “Total Dump” appears as a statement to a world which, second by second, seems to get out of hand. But their answer now seems pretty adjusted. The sound is, due to high class recording, mix and master, very clear. You can pretty much enjoy the whole range of their music. The use of breaks and switches of styles in their music, which is a key point of them, began as a bit chaotic Hardcore style back in the days. Now it seems to be used as a very predictable gimmick. You kind of get the story after a few titles and then nothing really happens anymore. I am not saying it’s boring but it doesn’t catch me or makes me wanting to hear more of it. You can tell that all three of them are professionals on their instruments and seem to have nice ideas in the songwriting, it just misses something. And that something is quite noticeable. It’s not a bad record and for fans of BEARDED FISHERMAN or such I believe it’s the right thing. It just feels with “Total Dump” SOFY MAJOR missed a chance to show us how dump it all became. Check it on: www.facebook.com/sofymajor, www.deadlight.fr