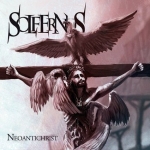 Czech Black Metal horde SOLFERNUS released their second full length album "Neoantichrist“ last October via Sathanath Records. I have to admit it took me a few rounds to feel this record the right way. "Neoantichrist“ is very diverse in sound and style. You get clean shouting, singing and whispering. As well as a taste of high screeching and a deep growling choir. The style shifts from old school mid tempo Black Metal to dark Heavy and Pagan Metal. And after the first few rounds i thoughts it’s a bit too much variety for one record, owed also through the use of different sounds and techniques of playing. But I think it makes the whole thing pretty interesting after all. Every song stands out for itself and provides therefore an interesting album. The only real consequence here is the acoustic guitar which opens and ends the record. But in between SOLFERNUS seem to have a lot of fun to use their skills and create whatever they thought is interesting. It would be useless to take every song and dissect it to explain how wide the range on this record is. I would recommend to get "Neoantichrist“ and figure out how they define the "Neo“ in their music. To name some good examples it would be ‘Misstresserpent’ and also the title song ‘Neoantichrist’. Check: www.facebook.com/pages/solfernus/322352119065, www.satanath.com