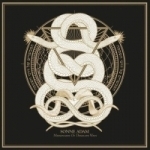 SONNE ADAM in Hebrew means something like "Hater of Man". So don´t make the mistake to think it’s a German band. Because the two words are also having a meaning in the German language. But totally different as in Hebrew. Anyway, these days the guys from Israel are returning with a new album, entitled "Messengers Of Desolate Ways", which is a compilation of all their EPs ("Armed With Hammers", "The Sun Is Dead" and "Doctrines Of Dark Devotion") as well as three previously unreleased tracks. Again they are serving an unorthodox mixture of old school extreme Metal sounds plus mellow influences from the Middle East. But don’t expect the music to be too much oriental or folkloristic. SONNE ADAM’s music is dark, atmospheric, old school, mid-tempo Death Metal. The sound and the recording is bringing back memories from the early / mid 90s. As a musical reference I would list here bands like CELTIC FROST, MORBID ANGEL, AUTOPSY, early SAMAEL, ASPHYX, NECROS CHRISTOS, etc.! The whole attitude on "Messengers Of Desolate Ways" is very original and authentic. Very far away from a modern and sterile release. This album doesn´t feature current trends. Or will please all the hipsters out there. I’m pretty sure about it. You can still listen to this album in 10+ years and will find no erosion at all. Such music was good, is good and will always be good. SONNE ADAM are having definitely a recognition value. So make sure to check out their music and join them on tour together with might GRAVE. Go and get the real deal. www.facebook.com/pages/sonne-adam/295451827227, www.myspace.com/sonneadam, www.centurymedia.com