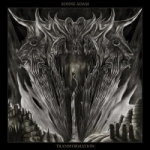 I’m really wondering why a label such as Century Media signed SONNE ADAM (well, actually the band is signed to Imperium Productions… Century Media “just” takes care of the CD edition of the album – Frank). Sure, the music is undoubtedly great but I don’t see a commercial value for such a big record company… but maybe the new old school Death Metal wave / trend is bigger than expected. Anyway, SONNE ADAM deserves any attention and promotion a bigger label has to offer. “Transformation” is a remarkable album of very dark and obscure Death Metal on a very high level. “Armed With Hammers”, the vinyl EP from 2010, was the first sign of life by these Israeli demons. And this EP is really a statement how Death Metal should sound. So I was full of expectation and really looked forward to more to come. Finally the debut album “Transformation” confirmed all my high expectations. This is one of the greatest debut albums I’ve heard in a long time. Imagine NECROS CHRISTOS without the intros and oriental instrumentals and you’ll have a good idea how these Israelis sound. Especially the obscure, ominous and sinister atmosphere is quite similar. I also hear some hints of slower MORBID ANGEL and very, very early PARADISE LOST. But SONNE ADAM’s dark, monolithic compositions have its very own style which is rather basic, ancient, mesmerizing and utterly merciless Death Metal. “Transformation” is mainly mid paced but there are many sluggish Doom parts. The nine infernal hymns are simple structured but varied enough so they are never in danger to drift into monotony. To sum it up, “Transformation” is a formidable debut album and SONNE ADAM is a band with huge potential. So get your fingers on this masterpiece of dark art as soon as possible and let it transform you into a disciple of SONNE ADAM… www.myspace.com/sonneadam, www.imperium-productions.com, www.centurymedia.com