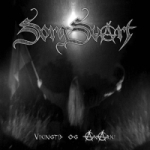 “Some music means something” are only four letters – but for our cult more important than everything else. Black Metal is more than music and during the last years a lot of old and new bands seem to forgotten the true essence of our art. But sometimes new bands with spirit, power and soul in their music are still hungry enough to release a powerful manifest to remind all of us about the right way to the dark places of our hearts. SORGSVART’s second release “Vikingtid Og Anarki” is honestly speaking an album which will catch your Metal heart right from the start. All parts are well known (Black Metal, Folk and Viking Metal fragments) but you can feel the heartblood in every song and I can only compare this album with one band which died away 4 years ago through a Blizzard which took away Valfar the Windir. Hopefully this album will find his audience not only in the pure Viking Metal scene because such Black Metal diamonds had became really rare these days. What Vreid couldn’t accomplish during the last years had finally achieved by SORGSVART – the resurrection of the almighty WINDIR. Get this album and bow your head to the fires which are still burning in the dark woods of Norway. www.einheit-produktionen.de, www.sorgsvart.net