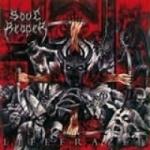 I didn’t recall SOULREAPER sounding that American… actually, I wasn’t too enthusiastic about their debut in 2000 anyway. Somehow I didn’t get access. This time, the band obviously wants their album to get into my mind by any means I guess: the mixture of DISSECTION and MORBID ANGEL has shifted towards the latter direction even more, especially the first 5 tracks. But most of all: after the short intro singer Christoffer takes my head, shouts: “Crush!”, hammers it on the table and the band starts blasting. Well, Christoffer doesn’t have to continue crushing my skull, at that point I’m already banging it off myself! The point I’m trying to make here is: SOULREAPER anno 2003 is much more demanding, showing more self-confidence. One just can’t remain seated, pricking your nose on the sofa. No matter if a song highlights SOULREAPER’s American Death Metal spirit like on ‘Godless Reaper Of Souls’ or if their Swedish roots are showing like on ‘The Slow Fall Of Death’: the band has written fucking brutal Death Metal HITS! One should mention the production (Andy LaRocque / Los Angered Studios) as well. Not so much for name-dropping’s sake but because it’s rough, dirty and mean, yet crystal clear. This is what guitars should sound like in my opinion. I just can’t find anything wrong with this CD and if SOULREAPER can deliver the energy unleashed on ‘Life Erazer’ on stage as well, I shall be addicted to them from that day on! And get your hands on the digi pack as the bonus track ‘Fall From Grace’ is a killer as well!