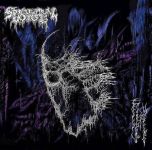 SPECTRAL VOICE is one hell of a Death / Doom hybrid hailing from Denver, Colorado. The band already made a name for themselves after releasing a handful of demos and now it’s time for their full length debut. “Eroded Corridors Of Unbeing” is one dark, eerie, nasty, oozing piece of work that probably brings every creature of the night to its knees. The band manages to capture such a morbid atmosphere that one immediately gets teleported to the nearest graveyard as soon as those ghastly first notes of ‘Thresholds Beyond’ come crawling out of the speakers. The tempo varies from slow to fist-pumping midtempo parts which is great in my book and the perfect combination for an opening track that sets the mood for what’s to come. Next up there’s the almost 14 minute epic, which has been swirling throughout the internet for quite a while, called ‘Visions Of Psychic Dismemberment’. Eerie melodies again build up into a heavy as fukk Doom orgy that’ll bring back every long rotting cadaver no matter what. We get blast-beats, sick vocal deliveries, more eeriness and pure mindfuckery. After those 14 minutes one’s psyche definitely is totally dismembered. ‘Lurking Gloom’ is a very Lovecraftian instrumental that brings forth great clean guitar melodies which stand out and add even more eeriness to the atmosphere. The same goes for ‘Terminal Exhalation’ and ‘Dissolution’ with the latter being probably the fastest track on the record. “Eroded Corridors…” is a pitch-black void that sucks up everything that come into its way – what a great record! Buy the album, support the band, show up at their forthcoming tour and never stop the madness! www.facebook.com/necroticdoom and www.darkdescentrecords.com deliver information.