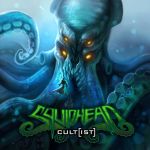 First I need to say that Mr. H.P Lovecraft is doubtlessly one of mankind’s great writers and master of literary pictures of horror and obscure. So of course it wasn’t too hard for a big part of the Metal community to adopt his ideas and stories, and make it their own. Maybe because of sheer lack of imagination, pure laziness or paying homage? Mr. Lovecraft seems to be one of the great influences to many bands. I believe the Cthulhu mythos hereby is the most worn out of all of them. Why in 2018 bands still suck on that drop, I don’t know. It’s like the Tolkien addicted Norwegian kids from back in the days. But that vanished at some point. So with SQUIDHEAD we have yet another band using the Cthulhu theme as their trademark. Which right away annoys / bores me a little. They even use the squid head as actual heads on their shows. SQUIDHEAD is a Belgian three piece which defines themselves as: “Lovecraftian extreme music played by an unidentified masked cult.” If you look deeper in the Lovcraftian ocean of mysteries you’ll figure out that it is basically one person called, Pierre "Pish" Minet, who does “in fact everything” and is influenced by Steve Vai, Devin Townsend and MESHUGGAH for example. Guest musicians, as I understood, to the whole project are: Benoit "Bono" Jean (bass), Renaud Hance (drums) and Kevin Sanchez (vocals). The music of SQUIDHEAD is a Beat Down Industrial Metalcore Technical Death Metal mix. Played and arranged quite professionally. As everything he / they do(es), as you can also witness in their videos published on their homepage (which maybe should be updated at least every two years). “Cult(Ist)” seems to be their second LP and thematically it’s all about the squid head and its natural habitat. The music is, as I mentioned, a mix through few brutal forms of Metal. Played with 8 string guitars and 6 string bass. Which means you get a lot of Jazz like pentatonic scales to listen. Not bad, but also not too surprising. But for that matter very well played. With a screaming and growling alternating voice. Nothing here will blow your mind, but if you are into that stuff you will enjoy the songwriting and musical skills. This release is something for die hard Lovecraftians and technique nerds I think. A decent record to bang your head and drown in the horrors of Cthulhu. https://thesquidhead.bandcamp.com, www.facebook.com/squidheadproject