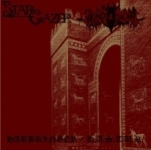 Years after its initial release on CD this awesome split gets a vinyl treatment by American based Bird Of Ill Omen Recordings. As mentioned in the review for the original CD edition released by Singaporean Dies Irae Productions in 1999, STARGAZER offer a unique blend of ferocious Death and Thrash Metal with Black Metal overtones, wrapped into great songwriting and abundant with many virtuoso details as e.g. the brilliant use of fretless bass playing and shifting precussive accentuation. It is more than fitting to describe STARGAZER’s approach as unique and progressive at the same time as they sound like no other band on this earth, avoiding any genre trappings or limitations while still writing brutal, energetic and captivating songs. Being generally on the same technical level as e.g. "The Scream That Tore The Sky" the material here sounds bit more compact and aggressive, which is at least partly owed to the pounding percussive work delivered by Phoenix Chrysalis who left STARGAZER after these recordings. Another reason why the entirety of "Harbringer" has been perceived as more intense than later material lies in mix used for the CD version. According to the band, the recordings have been boosted which resulted in a "fuzz effect" on the guitars, meaning they have been slightly distorted in a way not intented. This vinyl re-release features the original mix as originally envisioned and the difference is, while not overwhelming, definitely noticeable as the overall impression is now clearer, yet still retaining the power. Having spent a good deal of examination on the STARGAZER side it is now time to focus the attention on INVOCATION. It may be of interest that some members who played on H.A.S.T.U.R. (which stands for Horrific Ancient Sumerian Traditional Usurpers Remebered) are or were part of PORTAL. Other than that group, though, INVOCATION can be described as dark and evil yet structured Death Metal in the tradition of early to mid-period MORBID ANGEL with added touches of darkness as present in earlier INCANTATION as Frank put it in his review back then. Nevertheless, some rather intricate technical riffing and great dark atmospheric parts can be noted on here, the same goes for the clear yet commanding vocals. Unfortunately these tracks remain the only thing INVOCATION have released so every soul interested in dark, well-crafted Death Metal should get his or her hands on it. Turning to the design and packaging, several differences to the CD release can be noted. First of all, most visual details relating to the STARGAZER side have been omitted, the most obvious element being the depiction of an Asian deity riding on a chariot which now is only present as a subdued grey image on the black background of the lyric sheet. Also missed (at least from my point of view) is the title – "Harbringer" which was written in stylized fonts alluding to sanskrit letters. Instead, the focus is on the imagery used to illustrate the music of INVOCATION: the cover is graced by the picture of a Sumerian city gate, slightly zoomed in compared to the picture which can be found in the booklet of the Dies Irae version, bearing the logo of both bands. Neverthless, these differences are only of small importance – the finish of the sleeve is held in a dark reddish brown with highlights printed in golden ink, the logos and the split LP title printed in black which looks really noble. The lyrics can be found on a separate folded sheet, roughly DinA 3 in size, featuring each band logo (nice to finally see all the details of the INVOCATION logo) and a band photo from the respective time frame ( I just noticed that the picture of Phoenix Chrysalis is missing from the STARGAZER side). My nitpicking comments regarding details of the layout aside, this split LP is a great release featuring two outstanding acts from Australia – considering the fact that the original edition is impossible to get these days you should act now. http://birdofillomen.com 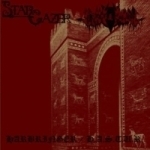 Even though I’m usually not the type of guy who likes split releases too much, this one by the two Australian underdogs STARGAZER and INVOCATION is definitely a worthy investment. I still remember the name STARGAZER from a feature in TALES OF THE MACABRE zine and with that Costa once more had proved his good taste. I originally thought they would be some kind of 70’s Hardrock act, inspired by the awesome RAINBOW classic of the same name. But I was completely wrong!!! STARGAZER play an extremely raw, savage and uncompromising mixture of aggressive Death / Thrash with sinister and really grim Black Metal vocals and definitely know to convince with it. It’s more than obvious that they are doing it from the heart, as they deliver their songs with the right feeling – a fact that most of today’s bands unfortunately are heavily lacking in. The drumming is partly really chaotic and the sound raw as fuck (but not bad because of that). 6 songs in total that you should really check out. INVOCATION, the other band on this disk, is also pretty good, but not as spectacular as STARGAZER though. Their 4 songs (+ intro) are pretty much in the vein of early MORBID ANGEL combined with the brutality of acts like INCANTATION. In other words: pure Death Metal brutality here! Nevertheless, good stuff. Available probably from various mailorders or directly from: Dies Irae Productions, P.O. Box 337, Yishun Central Post Office, Singapore 917612, e-mail: dayofwrath@mailcity.com, website: www.members.tripod.com/rickvasp/Main.html