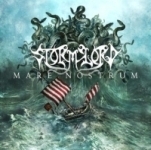 STORMLORD isn’t the most famous Italian band these days but at least their 1999 Last Episode debut “Supreme Art Of War” is worth an investigation on Ebay if you are fan of powerful keyboard Black Metal. In 2008 the band found a new home in Locomotive Records and their latest release “Mare Nostrum” is showing not a completely different band but the aggression and pure power of the old days had been replaced by higher musical skills and further musical influences. So STORMLORD follows bands like SEPTIC FLESH and ROTTING CHRIST on their quest to return to their roots and also adding something new / unique to their music. Due to new influences for example oriental parts, clear vocals and an overall reduced aggression level the term Black Metal isn’t completely matching for STORMLORD anno 2008 – it’s more a darker Heavy Metal but the essence is still there, the Metal heart still pounding. Not an essential releases but an interesting album for older and newer keyboard (Black) Metal fans. www.locomotiverecords.com, www.stormlord.net