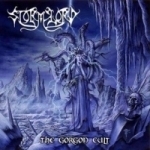 I see Nhashi’s point when complaining about STORMLORD and the likes being bands nobody needs. I mean: come on – NICE Black Metal!?! Where’s the sense in that? Imagine somebody really singing on this album it might even hit the fucking charts nowadays! BUT: doesn’t that mean that there are actually people out there who actually do need this sort of music?!? And, to be honest: I sort of like it, too. But don’t listen to me, I’m a Pop fan anyway! A few words about the contents on “The Gorgon Cult”? Alright, here we go: just like modern Pop music this doesn’t really enter my brain and I wouldn’t be able to whistle a tune on my way home but everything sounds highly professional: it’s got groove, it’s got speed and the musicians are pretty impressive. The keyboards are too present, though, and the occasional Death Metal grunts are extremely poor: no aggression and unbelievably sloppy. This is pretty annoying concerning the cover version in particular: IRON MAIDEN’s ‘Moonchild’. A really strong cover version, by the way, which underlines the aforementioned problem of STORMLORD: good musicians but no recognizeable songwriting in contrast to the masters. In fact, I’d like to have my supermarket play STORMLORD for me because it doesn’t distract me from what I’m doing. Nice Black Metal. Among other multimedia stuff such as unreleased MP3s from side projects of the band members, you’ll find a video included, namely ‘I Am Legend’ from the previous “At The Gates Of Utopia” album. One might almost call this mega professional if there weren’t those striking problems concerning the timing: whenever singer Christiano Borchi opens his mouth, his vocal lines are over already. I hope that’s not just because my computer is so fucked up. Apart from that, the video looks extremely cool with some really good zombie / gore action going on which fans of George Romero will definitely appreciate. But I suppose that’s not enough for Voices readers, is it? www.stormlord.net