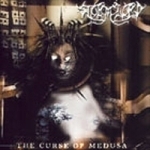 I can’t stand this any longer! No matter how many useless bands this scene will continue to spit out, there’s always labels willing to sign them. With Italy’s STORMLORD it originally used to be the infamous German company Last Episode that released both the band’s 1998 Mini CD “Where My Spirit Forever Shall Be” and their first full length album “Supreme Art Of War” about a year later. And I bet nobody really cared about them back then already. Now they are signed to Scarlet Records and the first thing we get offered is a compilation of two new songs (that will of course also appear on the next full length), two exclusive tracks, a DEATH SS cover (‘Baphomet’) and two live tracks (one of them being a horrible version of METALLICA’s ‘Creeping Death’). Who really needs this???? I mean, c’mon – STORMLORD are neither unique, nor totally aggressive, nor do they have the right feeling for Black Metal (not even for “Epic Symphonic Black Metal” as they prefer to label themselves…) – everything they come up with is just based on a cheap sounding keyboard, while the songwriting is predictable as fuck and definitely created straight from the book of poor Black Metal songs. To top all the crap, they have added pseudo heroic type, classical inspired choir vocals to the material every now and then, which gives them a third rate RHAPSODY feel. Brrrrr! Avoid by all means!!!