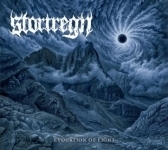 Since Jon’s DISSECTION does not exist anymore, someone needed to continue their legacy for making a musical journey into the same epic, pitch-black and chilling musical world of the aforementioned disbanded Swedes. Let’s welcome the Swiss STORTREGN – and also welcome the band’s 2nd album titled "Evocation Of Light", where all the journey begins regarding my shameless comparison to DISSECTION. This bunch has more than just well internalized what kinds of efforts it takes to get even close the mighty DISSECTION’s musical legacy. Obviously no one can ever create such superb, mind-blowing and so special albums as DISSECTION’s "The Somberlain" and "Storm Of The Light’s Bane" are – but especially the latter mentioned album, in which DISSECTION sort of reached its most creative peak so to speak. But then again, many bands have tried their best to plagiarize the same larger-than-life vibes and feelings that the first two DISSECTION albums offered for people when they were outed way back in 1993 and 1995. Some bands did a pretty good work at that – getting ‘DISSECTION-ized’, and some not so much. In my humble opinion, STORTREGN have adopted a lot of great and familiar things from Jon’s songwriting style into their 2nd opus "Evocation Of Light", really underlining the importance of melodic, striking guitar riffs work that makes songs really fly – capturing listener’s mind indelibly the way that make most of us to return to this album over and over again. On the band’s debut album, "Uncreation", STORTREGN already showed their strong love towards the 90s Swedish Black / Death Metal scene musically, and their undying love – especially towards DISSECTION’s very unique musical direction, has greatly been continued on this follow-up album of theirs. There’s some strong and truly underlining bits and pieces on "Evocation Of Light" that actually do remind me a great deal of the albums like "The Somberlain", "Storm…" and whatnot, even "Reinkaos" by DISSECTION. It’s mostly the guitars really – all those melodic guitar passages and stuff, that always tend to lead listener’s mind towards DISSECTION’s never-dying musical legacy that they left behind for further generations to come. STORTREGN will undoubtedly get / hear a lot of these comparisons to DISSECTION due to the musical impact of "Evocation Of Light" that it gives on people, but I guess they have already well prepared for that in their minds in advance. Nevertheless, if STORTREGN have meant "Evocation Of Light" to be some sort of tribute to Jon Nödtveidt’s past works, adoring and admiring him and DISSECTION freely without any stupid restrictions, then they have done such a splendid job at that. Get this for yourself simply to get amazed by it. Great, mind-provoking stuff here indeed, the latter word being said in a more positive tone of the word. More about STORTREGN can be found, at: www.facebook.com/stortregn, label: www.greatdanerecs.com