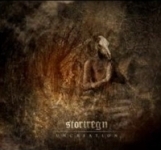 Unrelenting, aggressive and melodic Black / Death Metal from the back catalogue of No Fashion Records, or Wrong Again Records… would you like to get some? Both sort of cult-ish Swedish labels were releasing killer, top-notch stuff on their roster during the 90s – and I guess each and everyone of you who were following a bit at least what was going in Sweden during the 90s Metal scene-wise, surely became aware of such strong and deep footprints to the Swedish Metal scene that such acts as DISSECTION, NAGLFAR, SACRILEGE, MÖRK GRYNING, UNANIMATED and so many other names as well, left to the Swedish Metal soil. STORTREGN – despite sounding a lot like one of these many familiar Swedish names ripped out from the back catalogues of either No Fashion or W.A.R., hails from Geneva, Switzerland. The band’s 8-track debut album, “Uncreation”, follows incessantly the same traditions which many Swedish Black / Death Metal legions became once known for, by combining a great amount of catchy melodies with their extreme Metal sound – and creating a whole new genre that got the whole world’s attention eventually, band by band. STORTREGN’s strongest assets are laid upon their ultra-catchy song arrangements, in which melodies’ role cannot be highlighted enough. The guys have obviously put lots of their efforts to mimic the same sound that so many Swedish blackened Death Metal acts produced back in the day – and I can see nothing wrong at all with that. In fact, it’s bands like the Swedish NAGLFAR and SACRILEGE that STORTREGN does remind me mostly of. These Swiss seem to be on the top of their favorite type of game, copycatting shamelessly the heritage that was left behind by the Swedish Black / Death Metal armies back in the 90s, transferring bits and pieces from that era into the current times through the music they do. In fact, if someone had told me STORTREGN came from the past Swedish Black / Death Metal ground, and W.A.R. went bankrupt before they got “Uncreation” released on their roster, I would have been bought it right away as a fact. They indeed do sound so much like a Swedish band than anything really – and their beautifully flowing, sinfully catchy and melodic Black / Death Metal is honestly kind of irresistible altogether. Having said that, one cannot do without the other – I mean, the lyrics. There’s a lot to be improved on for them lyric-wise because after reading the songs’ lyrics, I cannot do much else but admit they are pretty horrendous and not well written at all. The guys should really pay way more attention to them in the future, in order to make the whole package to work at full 100% impact on its listeners. Meanwhile, while waiting for what will be ahead of them release-wise, let’s just enjoy this – and first and foremost, especially the music on this disc that truly reveals STORTREGN’s great potentiality to become a new, hopeful extreme Metal act from Switzerland to be reckoned with in the coming months (or years). Check them at: www.stortregn.com or www.greatdanerecs.com