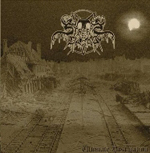 The "formula" for Black Metal (second generation Black Metal, for you purists) was pretty much set by DARKTHRONE’s "Ablaze In The Northern Sky". The album was never meant to be heavy, but a cold, grim outburst of blood frenzy against religions in general. German Black Metal outfit STREAMS OF BLOOD, sets the difference when it comes to the heavy side of Heavy Metal. It’s been years since I have heard a Black Metal album as heavy as their second release "Ultimate Destination". It caught me by surprise for sure. Right after the intro, I felt a hit in the head. Something that I though only the pioneers such as MAYHEM, BATHORY, SARCOFAGO and the likes could achieve. An album full of that evil aura I mentioned above, but also and album that is heavy as hell. Production wise, the mix highlights the guitars and the drums. The bass is present enough to add to the concrete-like overall sound. You can hear some Attila influences in Thymos vocals, yet they fit perfectly. They are nor growls neither the usual Black Metal shrieks, but right in between. Also the album is full of tremolo riffing and blast beats, as one should expect. But STREAMS OF BLOOD have crafted an album that mixes march like riffs à la BATHORY and some mid paced, almost groovy rhythms. Now, I really didn’t notice the drum machine until I had heard 4 or 5 songs. And if that is not a drum machine, then drummer Simon Schilling is a very skilled and exact drummer. "Ultimate Destination" is a great album. Any Metal fan in general should own it. Now, I’m on the look for their first album. If it is nearly as good as this one, then it deserves a space in any respected Metal collection. For info you can contact the band here: www.facebook.com/pages/streams-of-blood/125412697519534 or the label here: www.folter666.de