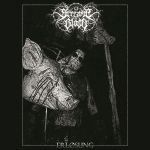 “Erløsung” is the fourth full length album by the German Black Metal band STREAMS OF BLOOD. It was originally released on digital format by Rising Nemesis Records, then on physical ones (CD and Tape) by The Hidden Art and Worship Tapes. It contains eight tracks for almost 44 minutes of polished second wave Black Metal. First of all I have to say that the cover artwork is terrible: an exercise in really bad taste. A cheesy cliché that in 2020 can’t shock anyone. Here we have a couple of bloody decapitated pig’s heads on pikes. Is it shocking? No. Is it gory? Even less. They probably bought the heads from a local butcher, thinking they were the new MAYHEM. What a terrible failure to copy something already done years ago and that, in my opinion, has nothing to do with extreme Metal and isn’t original at all. I defy anyone to find a link between Black Metal and animal cruelty. Established that their artwork sucks, move on to the music. STREAMS OF BLOOD play a very fast form of Black Metal, strongly influenced by bands such as DARK FUNERAL, MARDUK and SETHERIAL. There are tons of blastbeats that fit perfectly with the tremolo melodies. Nothing original, but the amount of sonic violence is very high. There are some typical Black Metal slowdowns too and the vocals are basic screamings. I think the best parts of the album are the fast ones (pretty devastating), although the guitar riffs are at times uninspired and not very spectacular. Another thing that doesn’t convince me is the production (too clear), since I would have preferred a rawer approach. In conclusion, if you can gloss over the cheesy cover artwork and the overproduced sound, maybe you’ll enjoy STREAMS OF BLOOD’s violent moments. On the contrary, there’s a high risk of being overwhelmed by boredom after a couple of plays. www.facebook.com/streamsofficial, www.facebook.com/proextremeart