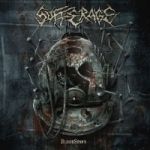 After their debut-album ”Raw Meat Experience” the German Death/Thrash Metal band Sufferage is back with their second album called ”Bloodspawn”. You can expect a well-done bastard of bands like Sepultura ("Chaos A.D." era), some Sinister, even some older Swedish hordes (Grave) and also a bit of Morgoth and Pestilence. The brutal voice of Jasmin Fleiner (yes, a female) is brutal and even disgusting; it really sounds like a male. Not to forget it is as powerful as fukk. As you could have already figured out, they are absolutely in the brutal Death Metal direction, here and there some Thrash influences are to be seen, too. Sufferage offer 11 tracks that are nothing but nice. Even with their brutality, it is just nice music. Everyone outside should wonder themselves if they want their Death Metal to be nice… Label contact: www.remissionrecords.de.