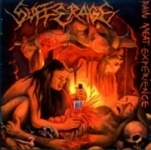 Lately I stumbled across SUFFERAGE opening for DESPONDENCY and DAEMONS EMBRACE in Oldenburg, Germany. They’re from Hamburg and they play a good portion of Death Metal. But there are so many bands of that kind around so I’m going to try and find out if anybody needs these guys. First of all they were highly sympathetic on stage and pretty tight. Their female vocalist is probably one of the best ones of her sex in this genre, definitely including Rachel from SINISTER. What we get on “Raw Meat Experience” isn’t too exciting, though. Pretty much what the average Death Metal band delivers nowadays: really fast blasts, groovy parts, some old school references (CANNIBAL CORPSE seem to be one of their favorites). On the other hand, they’re a little more tight than the average demo Death Metal band, they play their stuff with passion and there are other bands under contract that don’t even come close to the abilities of SUFFERAGE. The songs DO kick ass. Pretty impressive drummer, a good production, gory cover artwork and a strange sort of humor (?) expressed in song titles such as ‘I Hate My Cunt’. I guess I’m not going to elaborate on this nay further. Then there are 2 older songs included as live versions that don’t sound too good. Considering all of these points I guess an underground deal might be possible in the future. Until then: check out their homepage, download a few songs, judge for yourselves and have a beer or two. By the way, before I forget: something that counts against SUFFERAGE is the fact that they consider Astra to be their favorite beer brand! The Spanish inquisition is never at hand when you desperately need it! www.sufferage.de