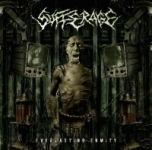 The Death Metal wrath of the brothers Fink, marches on! From the mean streets of Hamburg, Germany hail these maniacs of American styled brutal Death. “Everlasting Enmity”, the follow up to last year’s “Blood Spawn” album, that I unfortunately missed. Is a monumental collection (15 songs!) of sincere, aggressive brutality! Not since the early ’90s have I heard a relative new band from northern Germany (SUFFERAGE formed in 2000) deliver so much gore infested, ‘eadbanger friendly / pit inducing crunch. Not only this, but this record also is the debut of the band’s new front man, Sebastian Frohlich, and what a pair of lungs this man has! Chris Barnes in his prime is Sebastian’s only equal. And without question if there was an award to be presented to an upcoming Metal band for most Inspired, this trophy should be handed to SUFFERAGE now! Incredibly tight, proficient in every manner, coupled with a professional sound and attitude that truly makes it a pleasure to listen and review an act of this caliber. SUFFERAGE warms my black fucking heart to no end! Contact: www.myspace.com/sufferagehamburg or www.sufferage.de