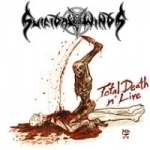 It’s not too often that you stumble upon a live-record by some rather small act deeply rooted within the underground. Even more so when it’s documenting a show you visited. Which is actually the case for my humble self with this new effort by Swedish Black-Thrashers SUICIDAL WINDS. As the album title subtly suggests it contains a cover of KREATOR’s ‘Total Death’ and their gig at last year’s “Festung Open Air” in Bitterfeld. Strangely enough I can’t remember anything about the concert. I’m not sure if the good ol’booze is to blame, but listening to the album another explanation comes to mind: the plain fact that there’s really nothing too special or memorable about their music. You can clearly hear their dedication and passion, but compared to masters of the genre such as DESASTER and especially DESTROYER 666 – which also played the festival – their songs are rather mediocre. At least the sound is very unpolished and raw, no overdubs here. It really feels like being back on the festival area, standing in the rain amidst dozens of smelly headbangers, being hung-over as fuck in the lovely surroundings of the ever enchanting Bitterfeld. Golden memories indeed… but apart from such nostalgic sentiment there’s hardly a reason for you to pick this up, shouldn’t you belong to the rare elite of SUICIDAL WINDS die-hards. www.pulverised.net