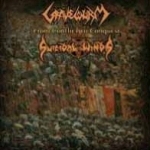 On this split GRAVEWÜRM from the United States and SUICIDAL WINDS from Sweden belt out five own compsitions each (the Swedes with an additional cover from of an OZ song), celebrating the old school. If I remember correctly, GRAVEWÜRM features (or featured) an ex(?)-NUNSLAUGHTER member (don’t quote me!)… the band is obviously out to play the most ugly, primitive and feral blackened deathly Metal possible… too bad that the songs are so basic, reduced and boring that I consider listening to it as a total waste of time! Cranking up the volume massively helps against the very thin recording but not against the unispired songwriting which seems to be a bit more leaning towards Black Metal than on their earlier works. Actually, their fifth song ‘Betrothed To The Underworld’ vaguely reminds me of UNGOD’s "Circle Of The Seven Infernal Pacts" – sadly this is the only moment where something notable happens. Fans of bands like COUNTESS or BARATHRUM might dig this, even though these two bands are stalwarts of innovation and perfection when compared to GRAVEWÜRM. Enough with that. SUICIDAL WINDS come as refreshing as a violent hailstorm after what seemed like an endless and dried out slumber of boredom! Fast and fucked up hateful Black/Thrash played with conviction and a decent raw and thick production is the game here, topped off with the already mentioned cover from OZ, an old Heavy Metal band from Finland. Leaving the usual MERCILESS comparisons aside, I have to agree with fellow reviewer Stefan who pointed out that SUICIDAL WINDS got quite a bit faster and changed their songwriting a bit. Nevertheless, the old school approach has not been altered or watered down in any way. Obviously I could have lived very well without the first five tracks but the SUICIDAL WINDS material justifies the purchase alone. One definite flaw, though, is the fact that either the studio or the pressing plant messed up the track endings: some tracks are cut off with the missing part starting the following song, hopefully that problem is only present on the promo cds. www.time-before-time.com